The Chinese have celebrated the harvest during the autumn full moon since the Shang dynasty. But the celebration as a festival only started to gain popularity during the early Tang dynasty. One legend explains that Emperor Xuanzong of Tang started to hold formal celebrations in his palace after having explored the Moon-Palace.

The festival celebrates three fundamental concepts that are closely connected. The first one is Gathering, such as family and friends coming together, or harvesting crops for the festival. It is said the moon is the brightest and roundest on this day which means family reunion. The second is Thanksgiving, to give thanks for the harvest, or for harmonious unions. And the last concept is Praying (asking for conceptual or material satisfaction), such as for babies, a spouse, beauty, longevity, or for a good future.

An important part of the festival celebration is moon worship. The ancient Chinese believed in rejuvenation being associated with the moon and water, and connected this concept to the menstruation of women, calling it “monthly water”. Offerings are also made to a more well-known lunar deity, Chang’e, known as the Moon Goddess of Immortality. The myths associated with Chang’e explain the origin of moon worship during this day. 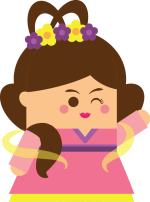 According to Lihui Yang’s Handbook of Chinese Mythology, when ten suns rose in the sky together, a hero named Hou Yi was given the elixir of immortality for his deeds of shooting down nine of the suns and left only one to provide light. Yi did not want to be immortal and leave Chang’e, his wife, so he let Chang’e keep the elixir. But Peng Meng, one of Yi’s apprentices, knew this secret. So, on the 15th day of the 8th month in the lunar calendar, when Yi went hunting, Peng Meng broke into Yi’s house and forced Chang’e to give the elixir to him. Chang’e refused to do so, swallowed the elixir, and flew into the sky. Since she loved Yi very much and hoped to live nearby, she chose the moon for her residence. When Yi came back and learned what had happened, he was so sad that he displayed the fruits and cakes Chang’e liked in the yard and gave sacrifices to his wife. People soon learned about it, and since they also were sympathetic to Chang’e, they participated in these sacrifices with Yi.

The Mid-Autumn Festival is celebrated by an outdoor gathering with families and friends, where they will eat mooncakes and watch the moon. Making and sharing mooncakes is one of the hallmark traditions of the festival. Typical mooncakes are round pastries, measuring about 10 cm in diameter and 3–4 cm thick. A rich thick filling usually made from red bean or lotus seed paste is surrounded by a thin (2–3 mm) crust and may contain yolks from salted duck eggs.

Another notable part of the Mid-Autumn Festival celebration is the carrying of brightly lit lanterns, lighting lanterns on towers, or floating sky lanterns. The festival is also celebrated by burning incense in reverence to deities including Chang’e. The Mid-Autumn moon has traditionally been a choice occasion to celebrate marriages. Girls would pray to Chang’e to help fulfill their romantic wishes. The Mid-Autumn Festival is also celebrated by a performance of dragon and lion dances, which is mainly practiced in southern China and Vietnam.

If you do not celebrate the Mid-Autumn Festival, you could still share the spirit by helping your Chinese or Vietnamese friends or colleagues to make mooncakes or lanterns. Who knows, maybe you will be invited to their family’s outdoor gathering, and have the chance to taste the celebrated mooncakes!