Bastille Day is celebrated with musical performances, communal means, dances and balls. Houses are decorated with buntings and banners in blue, white and red, the colors of French national flag or tricolor. People also wear clothing in the tricolor. Families and friends will get together for a picnic or a barbecue, and some of them will play pétanque, a game similar to boules or bowls, in backyards and parks. At night, there will be firework displays in many cities of France, the largest and most spectacular among them is held at the Eiffel Tower. 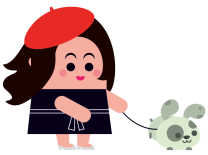 If you are in Paris on Bastille Day, make sure to head to the Champs-Élysées in the morning to watch the military parade, and be at the Eiffel Tower at night to watch the firework display! Even if you do not celebrate Bastille Day, you could still share the spirit by learning more about French history, culture and heritage. Or by serving French renowned dishes such as macaroons, crêpes, French cheese or French wine to families and friends, or watching French films. If you are fluent in French, you could also read French books!