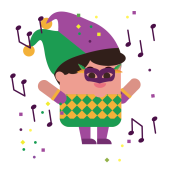 Mardi Gras or Fat Tuesday, refers to events of the Carnival celebration, beginning on or after the Christian feasts of the Epiphany (Three Kings Day) and culminating on the day before Ash Wednesday (known as Shrove Tuesday). Mardi Gras is French for “Fat Tuesday”, reflecting the practice of the last night of eating rich, fatty foods before the ritual fasting of the Lenten season. In 2020, Mardi Gras is celebrated on 25 February.

Mardi Gras arrived in North America as a French Catholic tradition with the Le Moyne brothers in the late 17th century, when King Louis XIV sent the pair to defend France’s claim on the territory of Louisiane, which included what are now the U.S. states of Alabama, Mississippi, Louisiana and part of eastern Texas. In 1703 French settlers in Mobile, Alabama,  the first capital of French Louisiana, established the first organized Mardi Gras celebration tradition in what was to become the United States. 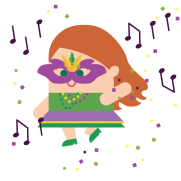 In 1723, the capital of Louisiana was moved to New Orleans, and the first Mardi Gras parade held in New Orleans is recorded to have taken place in 1837. The tradition in New Orleans expanded to the point that it became synonymous with the city in popular perception, and embraced by residents of New Orleans beyond those of French or Catholic heritage. Mardi Gras celebrations are part of the basis of the slogan Laissez les bons temps rouler (“Let the good times roll”). On Mardi Gras Day, the Tuesday before Ash Wednesday, the last parades of the season wrap up and the celebrations come to a close with the Meeting of the Courts (known locally as the Rex Ball).

Mardi Gras, as a celebration of life before the more-somber occasion of Ash Wednesday, nearly always involves the use of masks and costumes by its participants. In New Orleans, for example, these often take the shape of fairies, animals, people from myths, or various Medieval costumes as well as clowns and Indians (Native Americans). However, many costumes today are simply elaborate creations of colored feathers and capes. The Venice tradition has brought golden masks into the usual round of costumes. 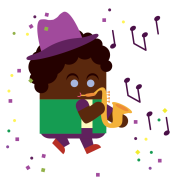 Women exposing their breasts during Mardi Gras in New Orleans, USA, has been documented since 1889. The practice was mostly limited to tourists in the upper Bourbon Street area. In the crowded streets of the French Quarter, generally avoided by locals on Mardi Gras Day, flashers on balconies cause crowds to form on the streets. In the last decades of the 20th century, the rise in producing commercial videotapes catering to voyeurs helped encourage a tradition of women baring their breasts in exchange for beads and trinkets.

If you are in New Orleans on March, make sure to join Mardi Gras! How about you? Have you ever been to Mardi Gras? Tell us!