In 2020 Nyepi will be celebrated by Balinese people on 25 March. Nyepi is a “Day of Silence”, commemorated every Isakawarsa or the new year according to Balinese Saka calendar. Nyepi, which is a Hindu celebration observed mainly in Bali, Indonesia, is recognized as a public holiday in Indonesia. 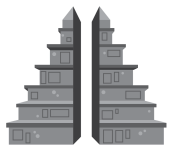 Nyepi will be started three or four days earlier with the Melasti Ritual. The ritual is dedicated to Sanghyang Widhi Wasa, the Supreme God in Indonesian Hinduism, and will be performed at a Pura or a Balinese temple near the sea. The Melasti Ritual is performed to purify Arca, Pratima, and Pralingga, the sacred objects from several Pura, and also to obtain sacred water from the sea. Next, the Bhuta Yajna Ritual is performed to banish the negative elements, to create a balance with God, Mankind, and Nature, and to appease Batara Kala, the god of the underworld in traditional Balinese mythology. Afterwards, around sunset the Pengrupukan ceremony begins when Balinese people will make noisy sounds by banging pots, pans and bamboo tubes, and also burn dried coconut leaf torches to drive out demons.

Balinese people will also make ogoh-ogoh, demonic statues made of richly painted bamboo, cloth, tinsel, and styrofoam symbolizing negative elements or malevolent spirit. The ogoh-ogoh will be paraded around the village and afterwards burned in the cemeteries.

The Nyepi Ritual itself is observed from 6 a.m. until 6 a.m. the next day. During it, there are several prohibitions such as no fire or light, including no electricity (Amani Geni), no working (Amati Karya), no travelling (Amani Lelunganan), no eating (fasting) and no self-entertainment (Amani Lelanguan). These prohibitions are also applied to non-Balinese people that are currently on Bali during Nyepi. Exemptions are only granted to emergency vehicles responding to life-threatening condition, women who are about to give birth, and Pecalang, the traditional security men who patrol the streets to ensure the prohibitions are being followed. During Nyepi Ritual, the Yoga/Bratha Ritual is also performed where Balinese people shall engage on self-reflection.

On the day after Nyepi, the Ngembak Agni/Labuh Brata Ritual is performed where Balinese people, who are now free from the prohibitions of Nyepi, forgive each other and to welcome the new days to come. Lastly, the Dharma Shanti Rituals are performed after all the Nyepi rituals are finished.

To prevent the widespread of Covid-19, Indonesian government instructed that Nyepi is to be celebrated in a closed-celebration. An ogoh-ogoh parade is also cancelled.

Always remember to implement Covid-19 prevention by social-distancing, covering your mouth and nose whenever you cough or sneeze, not touching your eyes, nose, or mouth if your hands are not clean, and washing your hands regularly with soap and water, especially after going outside or to public places!

How about you? Tell us your favorite Nyepi activity, or share your most memorable Nyepi celebration!