The 2018 Winter Olympics or commonly known as PyeongChang 2018 will be held on 9 to 25 February in Pyeongchang county, South Korea. The opening ceremony will take place on 9 February, while the closing ceremony will take place on 25 February. PyeongChang 2018 will feature 102 events in 15 sports, making it the first Winter Olympics to surpass 100 medal events.

No Olympics are completed without torch relay. For PyeongChang 2018, the torch relay was started on 24 October 2017 in Greece. On 1 November 2017 the torch has entered Korea, and will be continued by 7500 torch bearers representing 75 million population living in Korea. The torch and its bearers will travel by a diverse means of transportation, among them are turtle ship in Hansado island, steam train in the Gokseong Train Village, and marine rail bike along the east coast in Samcheok. The torch will even be relayed by robots in Jeju and Daejeon! 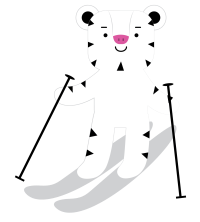 The official mascots of PyeongChang 2018 are Soohorang, a white tiger, and Bandabi, an Asiatic black bear. The white tiger, featured in Adorageek’s illustration, is chosen as one of the mascot because it is an animal closely related to Korean mythology, and is a symbol of trust, strength, and protection. Its name is derived from the Korean words “sooho” that means “protection” and “ho-rang-i” that means “tiger”.

The Asiatic black bear is a bear native to the Korean peninsula. The bear is symbolic of strong will and courage. Its name is derived from Korean words “bandal” that means “half-moon”, referring to the white crescent on an Asiatic black bear’s chest, and “bi” that connotes commemoration to celebrate the games.

If you are in Pyeongchang county during the Winter Olympics, make sure to attend the opening ceremony or watch the events live at one of PyeongChang 2018 venues. Just ensure to armor yourself with your warmest winter clothing! If you could not be in South Korea directly, you could still share the Winter Olympics spirit by watching the events when they are aired by your television station.

Adorageek encourages all of the athletes who are participating in PyeongChang 2018 to be strong, determined, and brave, just like Soohorang and Bandabi!