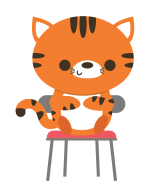 Our book of July is The Tiger Who Came to Tea! It is a short children’s story, first published by HarperCollins in 1968, written and illustrated by Judith Kerr. The book remains extremely popular more than fifty years after it was first published, and a theatrical adaptation of the story has been produced. A television adaptation of the book will air on Channel 4 at Christmas 2019. The original artwork for the book is held by Seven Stories, a children’s literature centre in the UK.

The book concerns a girl called Sophie, her mother, and an anthropomorphised tiger who interrupts their afternoon tea. A little girl named Sophie is having tea with her mother in their kitchen. Soon they are joined for tea by a tiger who drinks all the tea, eats all the food in the house and drinks everything, even draining the water from the taps. Then he leaves. Sophie’s father comes home and suggests that they all go out and have a lovely meal in a cafe. The following day Sophie and her mother go out to buy some more food, including a big tin of tiger food. But the tiger never returns.

Kerr first invented the story after visiting a zoo with her three-year-old daughter and told it many times before making it into a book. The book took a year to write and illustrate.

The Tiger Who Came to Tea is one of the best selling children’s books of all time. It has been produced in Braille, also published in German with the title Ein Tiger kommt zum Tee. It has been adapted into Welsh, entitled Y Teigr a Ddaeth i De. In this version, the little girl is renamed Catrin. There is also a Japanese edition, Ocha no Jikan ni Kita Tora. The book has also been adapted for stage with music by David Wood. The original production featured the actors Devon Black, Alan Atkins and Abbey Norman

Book of February: Harold and the Purple Crayon

Book of March: Blueberries for Sal

Book of April: Where the Wild Things are

Book of May: Song of the Swallows