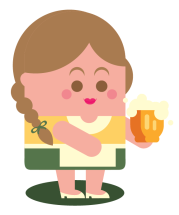 King Ludwig I (reign: 1825–1848), married Princess Therese of Saxe-Hildburghausen on 12 October 1810. The citizens of Munich were invited to attend the festivities held on the fields in front of the city gates to celebrate the royal event. The fields were named Theresienwiese (“Theresa’s Meadow”) in honour of the Crown Princess, and have kept that name ever since, although the locals have since abbreviated the name simply to the “Wiesn“. Horse races, in the tradition of the 15th-century Scharlachrennen (Scarlet Race at Karlstor), were held on 18 October to honor the newlyweds. The precise origins of the festival and horse races remain a matter of controversy, however, the decision to repeat the horse races, spectacle, and celebrations in 1811 launched what is now the annual Oktoberfest tradition.

Oktoberfest is opened with an entry parade of restaurateurs and breweries. The parade is led by the Münchner Kindl, the symbol on the coat of arms of the city of Munich, and followed by the incumbent mayor of Munich in the Schottenhammel family carriage. They are followed by the decorated horse carriages and floats of the breweries and the carriages of the other restaurateurs and showmen. The music bands from the beer tents accompany the parade that ran from downtown to the festival grounds.

At exactly 12:00 clock the mayor of Munich opens the first beer barrel in the Schottenhammel tent. With the initial pass and the exclamation “O’zapft is!” (“It’s tapped!”) the Oktoberfest is declared as opened. Twelve gunshots are then fired on the stairway of Ruhmeshalle. This is the signal for the other restaurateurs to start with the serving of beer.

One of the highlights of Oktoberfest is the traditional costume parade that is held on the first festival Sunday. 8000 participants march in the parade in historic festival costumes from the Maximilianeum on a seven kilometer stretch to the festival grounds. The parade is also led by the Münchner Kindl; followed by notables of the city council and the city administration and the state of Bavaria, usually the minister-president and his wife, traditional costume and rifle clubs, musical bands, marching bands, flag-wavers and about 40 carriages with decorated horses and carts.

During Oktoberfest, large quantities of Oktoberfest Beer are consumed. Only beer conforming to the Reinheitsgebot or the German Beer Purity Law, and brewed within the city limits of Munich, can be served at the Munich Oktoberfest. Beers meeting these criteria are designated Oktoberfest Beer. In 2013, 7.7 million litres (66,000 US bbl) of Oktoberfest Beer were served. Visitors also enjoy numerous attractions, such as amusement rides, sidestalls, and games. There is also a wide variety of traditional foods available.