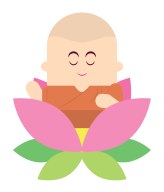 Vesak, also known as Buddha Jayanti, Buddha Purnima and Buddha Day, is a holiday traditionally observed by Buddhists and some Hindus on different days in India, Sri Lanka, Nepal, Tibet, Bangladesh, Bhutan, Indonesia, Singapore, Thailand, Cambodia, Laos, Malaysia, Myanmar, Mongolia and the Philippines and in China, Japan, Korea, Taiwan and Vietnam as “Buddha’s Birthday” as well as in other parts of the world. The festival commemorates the birth, enlightenment (Buddhahood), and death (Parinirvāna) of Gautama Buddha in the Theravada or southern tradition.

Gautama Buddha, also known as Siddhārtha Gautama in Sanskrit or Siddhattha Gotama in Pali , Shakyamuni (i.e. “Sage of the Shakyas”) Buddha, or simply the Buddha, after the title of Buddha, was a monk (śramaṇa), mendicant, sage, philosopher, teacher and religious leader on whose teachings Buddhism was founded. Gautama is the primary figure in Buddhism. He is believed by Buddhists to be an enlightened teacher who attained full Buddhahood and shared his insights to help sentient beings end rebirth and suffering.

The decision to agree to celebrate Wesākha as the Buddha’s birthday was formalized at the first conference of the World Fellowship of Buddhists held in Sri Lanka in 1950, although festivals at this time in the Buddhist world are a centuries-old tradition.

On Vesākha, devout Buddhists and followers alike assemble in their various temples before dawn for the ceremonial and honorable hoisting of the Buddhist flag and the singing of hymns in praise of the holy triple gem: The Buddha, The Dharma (his teachings), and The Sangha (his disciples). Devotees may bring simple offerings of flowers, candles and joss-sticks to lay at the feet of their teacher. These symbolic offerings are to remind followers that just as the beautiful flowers would wither away after a short while and the candles and joss-sticks would soon burn out, so too is life subject to decay and destruction.

Devotees are enjoined to make a special effort to refrain from killing of any kind. They are encouraged to partake of vegetarian food for the day. Also birds, insects and animals are released by the thousands in what is known as a ‘symbolic act of liberation’ of giving freedom to those who are in captivity, imprisoned, or tortured against their will. The practice, however, is banned in some countries such as Singapore, as it is believed that the released animals are unable to survive long-term and may adversely impact the local ecosystem if they do.

Some devout Buddhists will wear a simple white dress and spend the whole day in temples with renewed determination to observe the eight precepts, a list of precepts that are observed by lay devotees on observance days and festivals. They include general precepts such as refraining from killing, but also more specific ones, such as abstaining from cosmetics.

Some temples also display a small statue of the Buddha in front of the altar in a small basin filled with water and decorated with flowers, allowing devotees to pour water over the statue; it is symbolic of the cleansing of a practitioner’s bad karma, and to reenact the events following the Buddha’s birth, when devas and spirits made heavenly offerings to him. Monks will recite verses uttered by the Buddha twenty-five centuries ago to invoke peace and happiness for the government and the people. Buddhists are reminded to live in harmony with people of other faiths and to respect the beliefs of other people as the Buddha taught.

Celebrating Vesākha also means making special efforts to bring happiness to the unfortunate like the aged, the handicapped and the sick. Vesākha is also a time for great joy and happiness, expressed not by pandering to one’s appetites but by concentrating on useful activities such as decorating and illuminating temples, painting and creating exquisite scenes from the life of the Buddha for public dissemination.

If you do not celebrate Vesak, you could still share the spirit by bringing happiness to your families and friends. Help them, give them presents, or cook for them. You could also volunteer to help at your nearest charity organizations or nursing homes.

How about you? Tell us your favorite Vesak activity, or share your most memorable Vesak celebration!